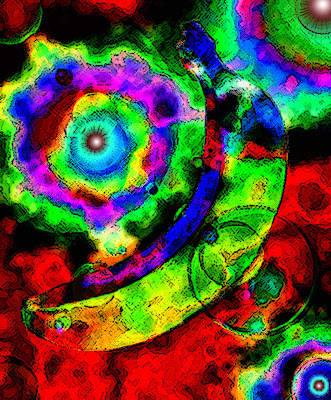 As she exits the school, Lily breathes a sigh of relief.

She hated these mandatory outings, these pointless lectures to schoolchildren. She knew most would comply with the law; the others would be quietly whisked away to rehab, where they would spend the rest of their lives as convicted Rabble-Rousers.

Like that redheaded kid in the back of the room, just a few years away from rehab.

Secretly, she admired his sassiness. Too bad his high spirits would come to nothing–no place for dissent in Corpus Luminous. The Government was always right, the Government always won.

As she walks to her aircar, she says, “DotTel!”

The phone rings for what seemed a long time. She’s slightly dizzy from her 500-calorie-per-day suspension, imposed by Judge Adam H. Alvarez, but she will soon adjust, maybe even lose a few of those vexing pounds that keep landing her in court.

“Yes, I need to book the Raspberry Torte room for next week, the 12th, for four hours.”

“Judge Alvarez will be my partner, so everything must be perfect.”

“The Judge is quite popular here.”

Lily’s heart sinks. She can only imagine the incredible delights other ladies have arranged for the Judge’s Lunch. Will she be able to outdo the others? She will have to try. Legally, she’s okay–they have an iron-clad agreement and the Judge is required to accept whatever arrangements she has made–but she does not want to feel shamed before him.

Besides, it is likely she’ll be standing before him again at The Board of Acceptable Weight, fined yet another Fat Tax. She wants him to remember their Business Lunch, but for the right reasons.

To gather her bearings, she leans against her aircar, a Cherry Coronet 5000, fully loaded with an automatic navigation system. She has never learned how to drive.

She is nervous about First Lunch with the Judge. There are special rules about this event--it has to be perfect--especially since it will, in essence, be a Business Lunch.

“In that case, I’ll need to meet with you in person.”

*
Lily has never liked preparing for First Business Lunches, because too much can go wrong and has, like the time when her Lunch partner was more interested in the male attendant than he was in her. Very awkward for everyone, especially the attendant, who ran out of the room, screaming, “I don’t get paid for this kind of crap!”

Lily meets with Sid, the top Business Lunch Concierge at The Banana Tap.

“No problem,” Sid says. “We have his preferences on file.

For over three hours, they pore over his likes and dislikes: he despises daisies of any kind, including floral designs on Altar Cloths, but he loves deep red carnations, the most expensive dish on the menu, so she orders three dozen. “Nothing but the best quality,” she says.

“We serve nothing but the best.”

To go with the three-dozen carnations, she selects a matching Altar Cloth for when they take part in Communion. She even selects carnation under-covers; given the Judge’s popularity, the Altar Cloth could, at some point, rumple up and even slide off the Altar. At any successful Business Lunch, lots of enthusiasm and a little sparring is expected and even desired.

Lily interviews 10 attendants and reads through their profiles, before settling on two, a man and a woman, as is customary when the Business Lunch partners are of the opposite sex. Although all Business Lunch Attendants are tall, very slim, and attractive, selecting the right attendants is an art, based on intuition and knowledge of their backgrounds. Lily makes sure that her attendants have a solid and positive history with her partner, while also appealing to her. She particularly likes the man, who is of pure African descent and highly educated in the Humanities, and the woman, a lovely redhead with ivory skin, a known favorite of Judge Alvarez.

She selects garments and undergarments with great care.

For the Judge: a matching robe, except that his carnations will be all red. Undergarment: filmy red briefs, also scented.

The attendants have their own special garments, mandated by the Attendants of Corpus Luminous Union: a blue silk robe for her and a silver one for him--one less thing to worry about.

For Aroma Therapy, an incense of carnation and rose. It is important to fill the room with intense delights.

For the Body Rub, Lily chooses a special red oil, essence of carnation and clove.

For Communion: a lighter version of the red oil, two red feathers, a Butterfly device, and a platinum finger enhancer (with warmer), a special tool for increasing pleasure centers associated with touch and texture.

For Post Communion: a special stone spa, filled with warm scented water, consisting of a slightly sweet bouquet, a recipe which remains a secret. Lily selects Jasmine, the top brand of spa water.

The Raspberry Torte Room turns out to be a good choice, with its red decor, lovely hand-carved Altar, and large size, so, fortunately, Lily is able to keep decoration costs reasonable.

So many preparations! But, finally, Lily closes the deal by pressing her fingertip to the credit blotter. The bill is shocking and will set her back financially for the next month or two, but she has senses that, in the end, it will pay off.

Now all she can do was wait and spend her non-working hours meditating for the Business Lunch and hoping that all will go well.

Lily doesn’t wonder if the Judge is married, because it no longer matters. If he has a wife, she won’t care too much if her husband does Lunch with other women; it is likely that she, too, has regular Lunch Dates with men.

Lily guesses that Judge Alvarez is in his mid-40s, part of a generation that still wed, especially among the educated classes, so there’s a 50/50 chance he’s married.

As a modern liberated woman, she will never marry; marriage would be much too confining and socially limiting, but she wants children and thinks maybe the Judge might be a good candidate. These days, she is always on the lookout for suitable donors for her future children and is financially secure enough to sign waivers exempting any potential donors from fatherhood responsibilities.

And on that fateful day, as she stood in judgment before Judge Adam H. Alvarez, she noticed his strong jaw and wide shoulders; she liked his confident tone, his emphatic legal ruling making her tingly all over, almost always a good sign for procreation. She decided he was worth some inquiries and an expensive Lunch. If nothing else, she had solved a pesky problem: possible imprisonment and/or a huge fine; therefore, suggesting Lunch together has turned out to be a win-win situation.

Next week she’ll know more about his mental state, personality traits, physical specs, and DNA profile--whether or not she would be willing to accept his seed. In four hours of intense lunching, one can learn much about candidates.

Lily jumps into her car and flies off to the A-hh factory, where she and a colleague have a standing Lunch arrangement, short and casual, of course, and mutually satisfying without any procreation expectations.

Corpus Delicious is copyright 2009-present (Jennifer Semple Siegel), and may not be reposted or republished without permission from the author.
Posted by Jennifer at 11:01 AM